V is a unique project for me, the topic of loneliness meant that the work on it took place in such an atmosphere, I prepared the script, scenography, costume, stage movement and I started directing.
In the world of "V", the heroine travels to the past with the need to face life and vital energy, takes an unhurried journey, faces the aforementioned loneliness, loss and slow "getting used to" to finally build herself for a NEW ... 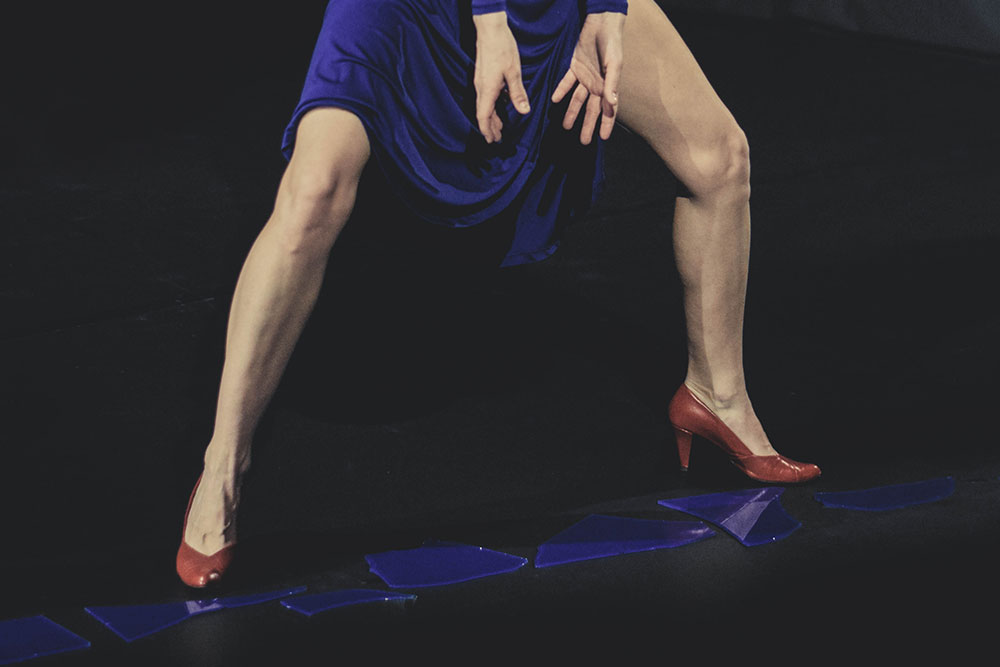 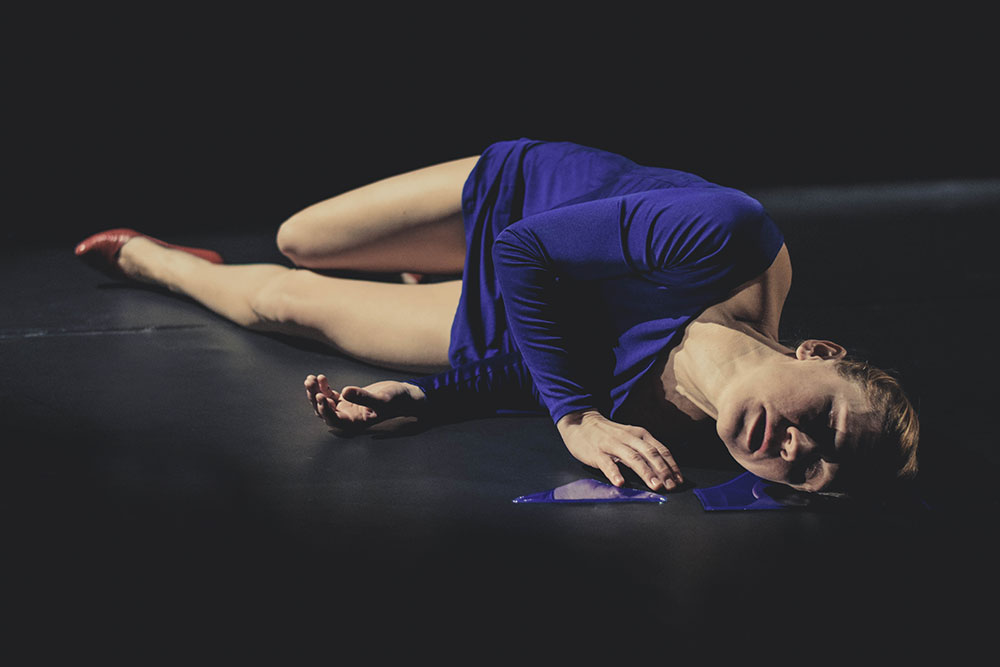 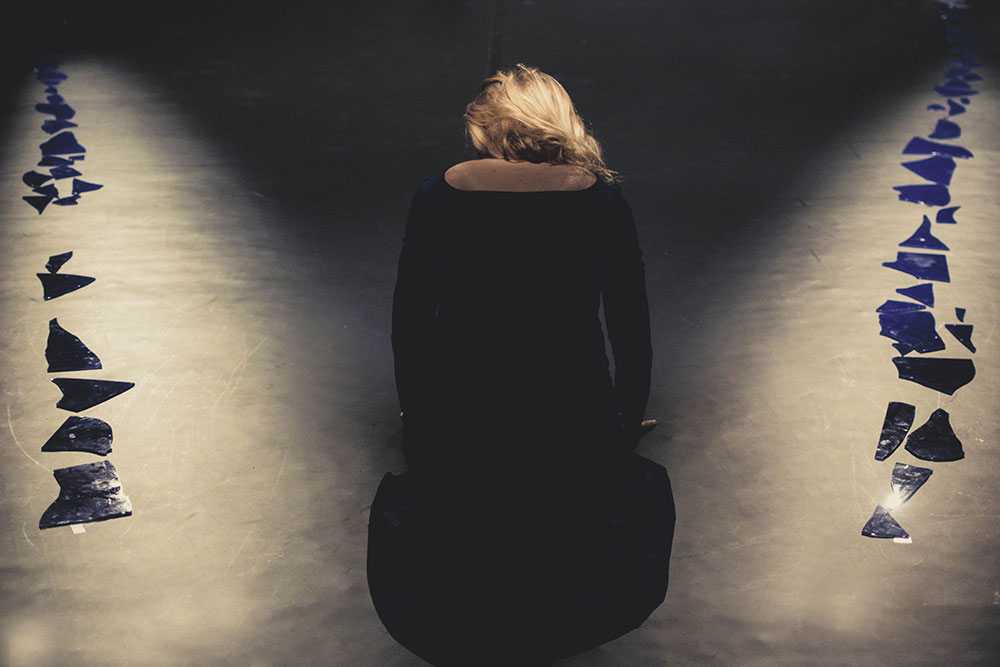 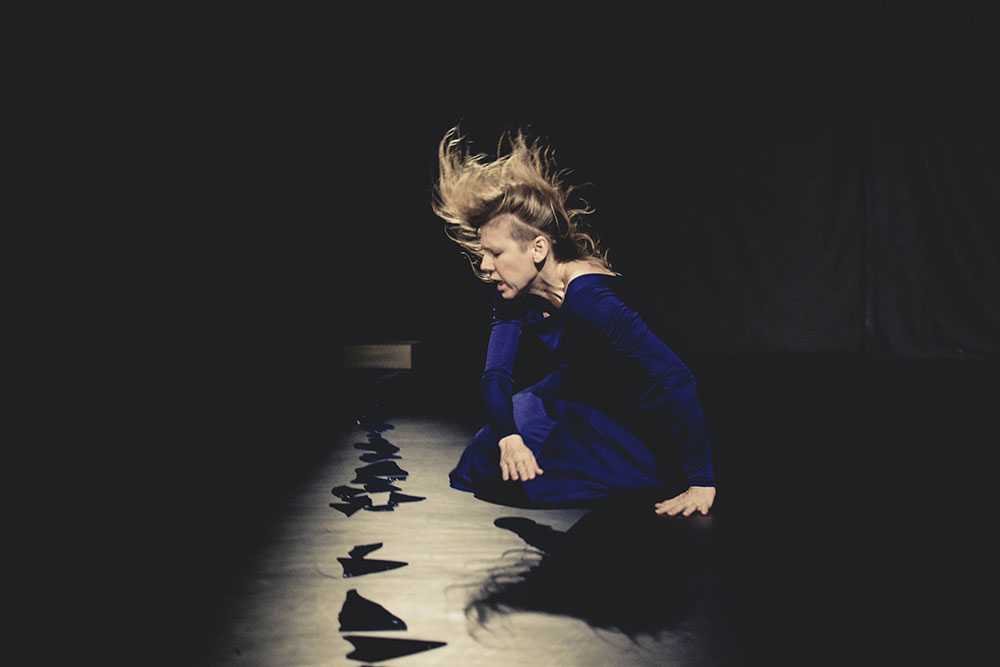 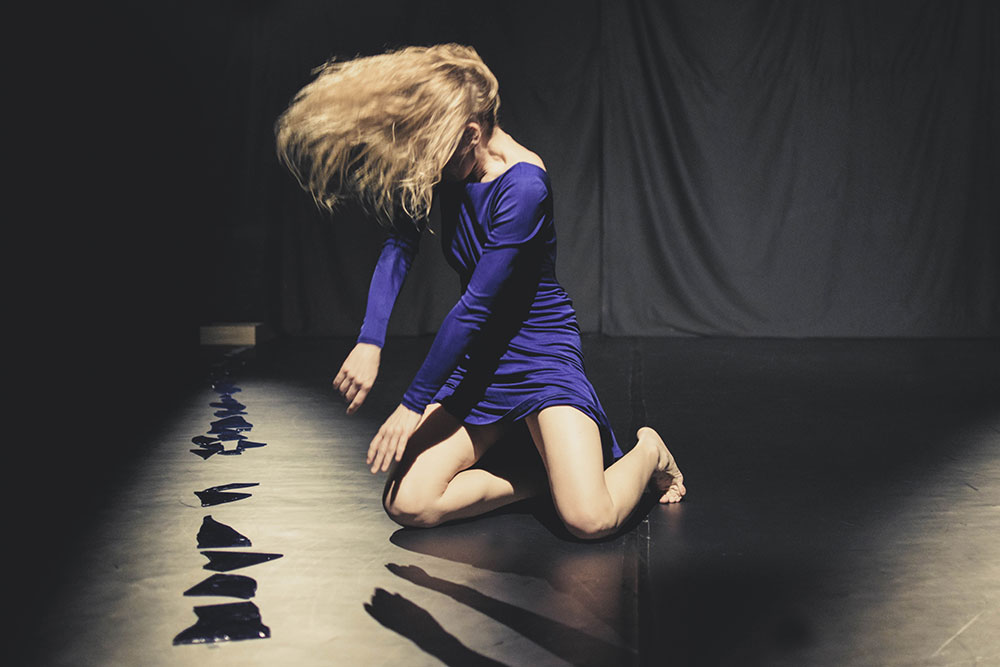 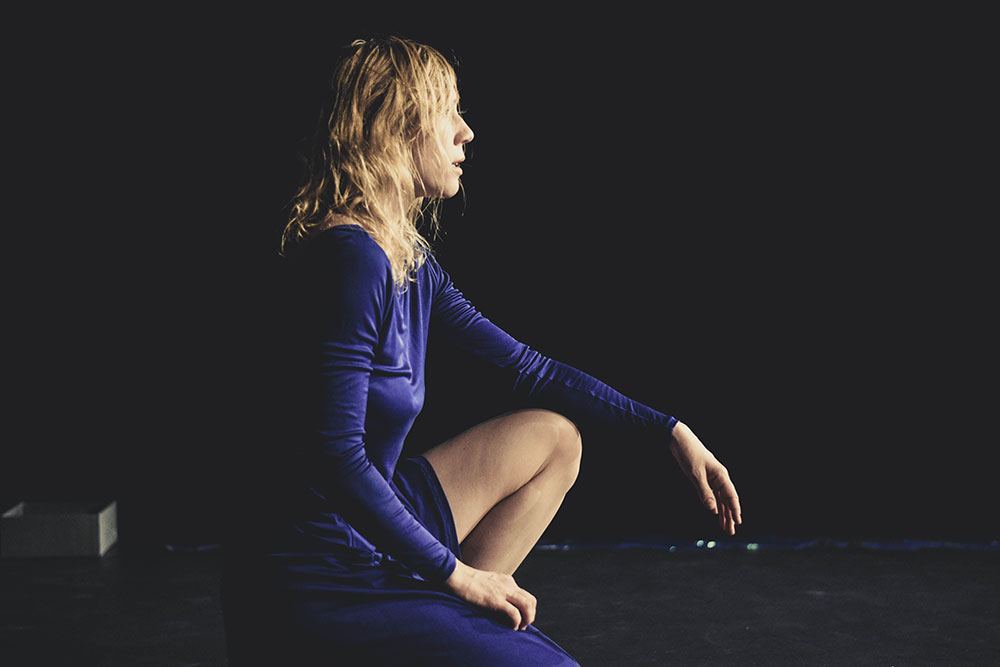 “One of the reasons why we crave love, and seek it so desperately, is that love is the only cure for loneliness, and shame, and sorrow. But some feelings sink so deep into the heart that only loneliness can help you find them again. Some truths about yourself are so painful that only shame can help you live with them. And some things are just so sad that only your soul can do the crying for you.”
Gregory David Roberts, “Shantaram” 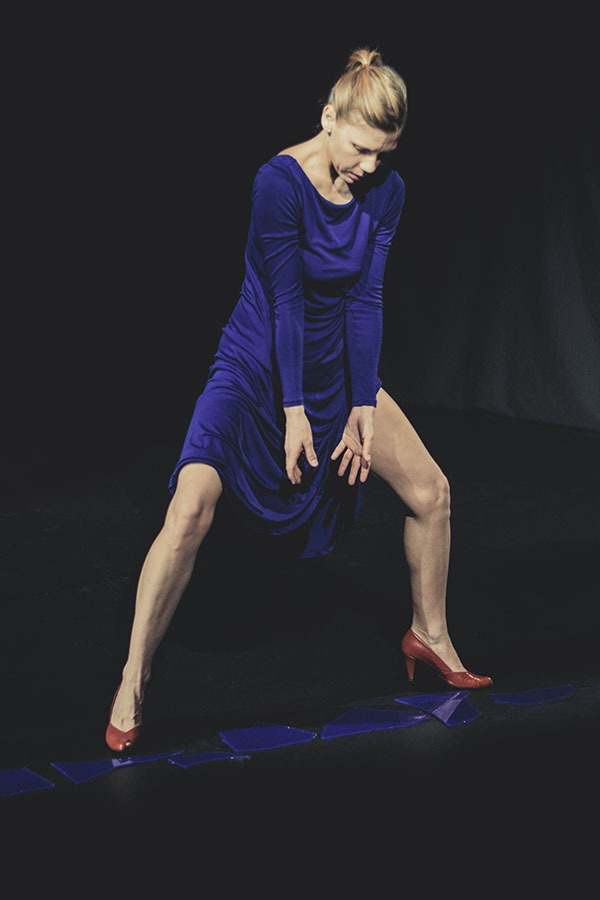 Monika Wachowicz is an actress associated with the A Part Theater in Katowice. She played a monodrama “V” for the women in prison.
Unusual Form
Before the performance the actress showed a symbolic and a quite enigmatic title “V” like a victory or a road. A movement, gesture and dance were not easy in the interpretation. It was demanding for the prison audience to understand a replacing of the words with a visual symbolism. A significant interpretative vigilance and an opening of a mind to a new and an unusual form of communication was required.
Attention and Anxiety Condemned ladies watched carefully the bold actions (an eloquent movement, facial expressions, suggestive gestures, a playing with colors, lights and shadows) by the excellent actress on the stage. A distance traveled by the actress revealed in a literal and portable way the struggling with their own fears, femininity, demons of the past or a lack of acceptance. Such feelings are close to anyone who happens to err in life. Persons deprived of a liberty belong to this group.
To freedom and to be better
Monika Wachowicz played the road in a reckless, bravely and uncompromisingly way freeing herself from the limitations. Initially, the road to self-acceptance and love caused consternation among the prison audience. After a while after asking if the pieces of glass arranged by an actress in the shape of the letter “V” can be understood as the crumbs of life – everything became clear. Only after some time this performance works therapeutically and liberatingly. In the peace and quiet, everyone will arrange the scraps of the past life. Everyone will get rid of ballast, anxiety and self-limitations, trying to be better – for themselves and others.
Wojciech Brzoska
Detention center for women in Katowice/Poland. 3.12.2019
Translation: Artur Turek


A woman and the color blue

‘V’ is an emotional story about fighting a heroine’s own demons and confrontation with the past. She recalls her memories and struggles against the fear we all happen to feel -the fear of being alone. Nonetheless, it is primarily a story about love and self-acceptance.
Monika Wachowicz’s solo performance fluently displays a few forms of expression. It is a successful combination of emotions, dance and a physical theatre. The performance is a universal story because the experienced emotions may concern everyone. The character created by the author is lost in the confrontation with her life. Unable to find a relief, she goes on a journey through the nooks of her soul, trying to deal with loneliness -a feeling which happens to be helpful.
The scenography is very limited – it emphasizes the most significant element – the space where the heroine functions. The lighting has a huge influence in both a visual and a symbolic way. Shadow cast by the woman accompanies her in nearly the whole performance. She turns to the shadow and they become friends. Blue is the prevailing color of the spectacle. We subconsciously associate it with sadness and immensity of an aerial space. The pieces of cerulean glass are hidden in two shoeboxes – as souvenirs from the past, fragments of memories. Two translucent curtains establish a climate of intimacy. The heroine uses them to isolate herself from the audience and the external world. A dress the heroine wears is blue. Blue clothing is a symbol of contemplation and faith. The faith we observe during the performance is the faith in individualism which the heroine acquires as the action evolves.
Body movement – from insecurity through the dance full of passion to the sensual freedom and relief -illustrates the heroine’s journey. The woman attempts to put her life together using her memories (pieces of the blue glass). Then, she tries to confront her life. She tosses attempting to find her only companion -her own permanent and intangible shadow. Her later loneliness and the feeling of loss are dominant. As the performance evolves, she demonstrates to the audience how important self-love is. In the last, thrilling act, to the accompaniment of ‘Casta Diva’ performed by Maria Callas, we see that the heroine is happy and accepts her own body and emotions.
‘Clarity’ and unambiguousness of the performance, not common for performing acts, are the advantages of the performance. The author leads a very clear narration which helps the audience understand it. Her every move carefully illustrates the story she has decided to tell. The woman in a blue dress has an impact on the audience with her desperate seeking happiness. She refers to the fragments of memories, giving her safety, love. But does being loved bring happiness? The artist seems to give a positive reply to this question, but she does it in an indirect way. The heroine appears to be fulfilled, because she has found and loved herself, with all her weaknesses and flaws. Because the most important thing is love – even if it is expressed as self-acceptance and blue is the color signifying calmness.